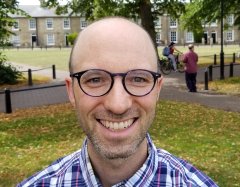 Software Engineer at Jane Street. I believe that clever application of theory can eliminate a great deal of programmer errors – specifically, I think fancy types and functional programming are the future. I completed my PhD in 2016 at University of Pennsylvania working under Stephanie Weirich; my dissertation topic was the integration of dependent types into the Haskell programming language. I am a core contributor to the Glasgow Haskell Compiler (GHC) and Chair of the Board of Directors at the Haskell Foundation. My current work at Jane Street centers around further development of the OCaml language and compiler.